Watching Over Our Neighbourhoods

A sense of ‘feeling safe’ is the foundation of every healthy community. In the complex world of 21st Century Hove and Portslade there’s no single thing that provides that sense of safety, instead it has to come from a combination of policing that is sophisticated enough to catch criminals swiftly on the one hand yet also be a quiet and reassuringly visible presence too. There must also be a community that is actively protecting itself and looking out for the safety and wellbeing of others. 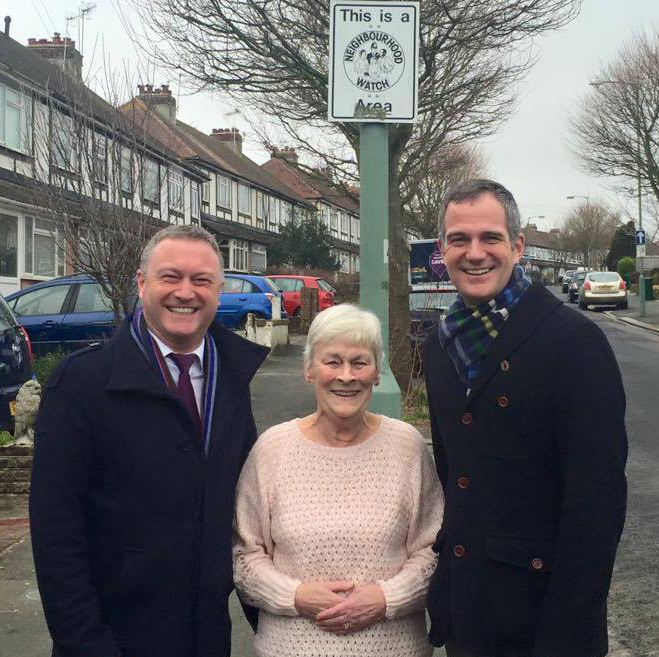 Chris Henry, council candidate for Hangleton & Knoll, and myself have got to know Eve in recent weeks. Eve founded the Neighbourhood Watch scheme for her community in Hangleton 25 years ago and has been giving it the drive and energy needed ever since. Today I took Steve Reed MP, Shadow Minister for Crime Prevention, to meet Eve because her story is really important as we work hard to keep our communities safe and crime-free going forward.

Firstly, Eve has some amazing stories! Like when she spotting potential burglars at work and got the police into action in time to facilitate several arrests and convictions. And the time she noticed a van containing several men acting suspiciously in her street. After watching for a while she decided enough was enough and walked right up to confront them. After some muffled conversations and some very red faces the truth was revealedthey were under-cover policemen on a stakeout!! Nothing gets past Eve!

Eve told us about two challenges that her Neighbourhood Watch scheme faces. The first is that after 25 years she needs a new generation to carry on doing the leadership work with equal dedication and vigour that she has shown. She needs to support a husband who’s poorly and also spend time being a loving mother, grandmother, and great-grandmother too, so it only seems fair for others to carry the load from now on.

Secondly, with the police suffering withering cuts the link between Neighbourhood Watch schemes and the police force have become stretched. It means the active and supporting flow of support between communities and the Force are stretched beyond breaking point in places. Government must be responsible and lower our national debt, but it will be a hollow victory if it is done needlessly fast or in a manner that brings suffering and insecurity to our communities.

We couldn’t let an opportunity like this pass without putting Eve’s wisdom and experience to good use on Labour policy making. Steve talked her through his thinking on new and innovative ways of supporting communities and police to tackle the low-level crime that can blight neighbourhoods. It was a fascinating conversation and I am sure some of the ideas that flowed between them will soon be finding its way into Labour policy – I certainly hope so because our communities and police force deserve the widest possible set of tools to keep us feeling safe and therefore free to enjoy all the opportunities life has to offer.

Thanks to Eve for spending so much time with us and sharing her wisdom and insight. I know you’ll join with me in wishing her husband a swift recovery from illness too.

Be safe! All the best, Peter