Finally Something Local Tories Are Passionate About: My Campaign!!!

Please forgive meI’m about to have a rant! You all know that I very rarely do this and almost always focus on action, policies, and the future, but I need to blow off steam so here goes 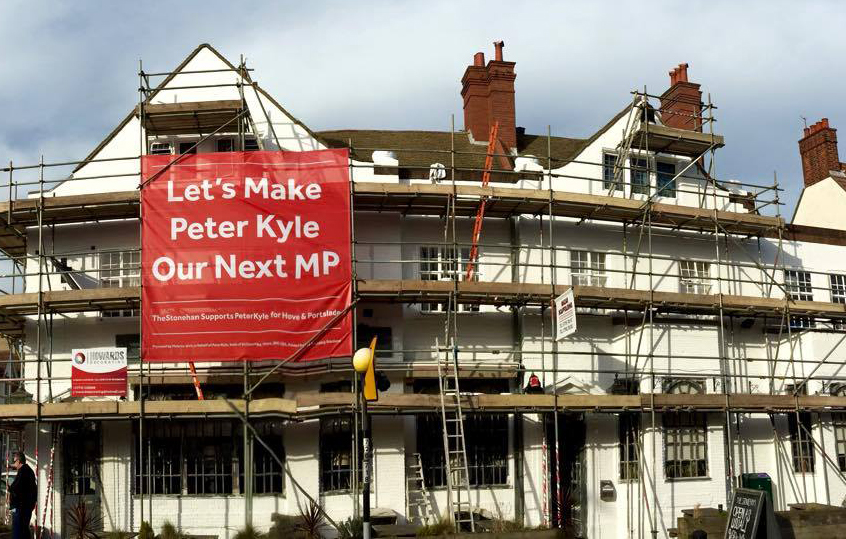 I’ve been wondering for years now what actually gets local Tories angry enough to stand up and take action. And now we finally have an answer.

Is it the axing of 500 frontline Sussex Police officers? No.

The Bedroom Tax which has put hundreds of local families at risk of eviction? Not a chance.

The cutting of one of our local fire engines? Nope.

The gagging law? Homelessness?? The state of Portslade parks??? Or the dwindling support for disabled people???? Not a whimper.

But this week something really got them going. Really angry. Fuming in fact. Social media was ablaze. Activists, councillors, and candidates were called immediately to action.

What was this earth shattering event? Why, it was the banner on the Stoneham Pub supporting my campaign! Even the Green Party parliamentary candidate was so horrified about it that he made a public cry of support (love?) for the Tories, screaming, “You must hasten first thing to see what is affixed to the scaffolding”.

And they did. And then they submitted a complaint to the council and demanded they waste your tax by investigating whether it breaks any planning regulations.

I wonder if they would have been so concerned if the banner had supported their campaign?

For the record, I love it when communities get political and join in debate, whichever party they support. When I see an opponent score a victory or achieve something for our community, I learn from it and I work harder. Because that’s when democracy delivers for people – when candidates judge themselves and others by what gets done for residents. I don’t try and gag people (or charities, for that matter!) in order to further my own interests. And I never will.

A link to the Argus write-up of this sorry little tale is below.

Okay, I feel better for that and am back to my normal cheery self. Which is handy as I’m off to meet friends at the opening of the new Railway Pub in Portslade and am very excited about it too! Have a fantastic weekend everyone – whichever political party you support! All the best, Peter